Sometimes it’s just quiet. One of those days when the bush decides to have a day off where 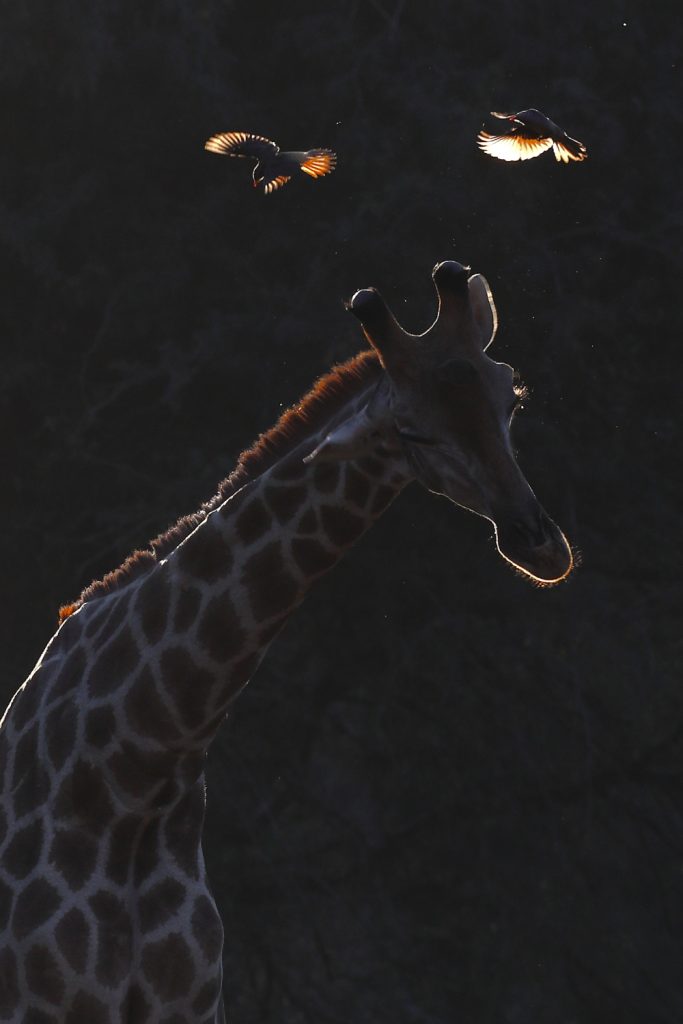 they can all chill and the prey animals can destress hopefully knowing they won’t be eaten. Well so it seemed last night. I did follow up on some impala alarm calls and a jackal shouting in the same area but came up empty handed. The herds of impala where in their usual areas. The giraffe mainly south of the river where they seem to nursery their young. Wildbeest scattered around and a few zebra. Some eland were in the tall riverine having come to feed on Nyala berries. Kudu were along the river bank. I heard elephants in the mopane to the north. Lions, leopards and hyaenas were quiet as the new moon disappeared early below the horizon. Quiet as it was, it’s always just bliss being out there.

KiKi gets to capture a giraffe

10th June 2019
For the last few days we’ve been following guys from the Giraffe Conservation Foundation https://giraffeconservation.org/ attaching satellite transmitters to 14 giraffe here on Sango. This is no easy task as giraffe being so tall and big are extremely tough to handle.
The operation starts at dawn. The ground crew is mobilised and move into the area where they hope to be catching that day. This is a crew of about 10 hard, fit guys who are trained to do this very operation. They’re armed only with a couple of ropes to take on the worlds tallest mammal. The chopper then takes to the air with a very experienced pilot and riding shotgun with him is the guy who will dart the giraffe from the air. They locate a giraffe that is suitable for their needs of capturing all the necessary data. Swooping low over tree tops they duck and dive after the giraffe which is swerving this way and that. It’s tough flying, not only to stay with the animal but keeping the shooter lined up in a position to get a dart into the giraffe. He might be lined up but the giraffe is now at full gallop, its body moving all the time. Not an easy shot. Bang and the dart hits its target. At the same time the chopper backs off and ascends into the sky. The ground crew are alerted. They’re now racing to get to the exact location. They have 6 to 8minutes to get there before the drug takes full effect. The chopper keeps a visual on the giraffe herding it gently towards any open area in the vicinity. The bush here is fairly open savannah, with lots of low scrub and the odd Acacia or Sickle-bush thicket. The vehicle has visual of the giraffe, which is now running almost in slow motion, the drug is kicking in. They have to get around to the front of the giraffe. She runs through a thicket, the vehicle has to detour. More wasted time. As they round the thicket the giraffe sees them and changes tack. The Land Cruiser is spewing dirt as the wheels gain traction before becoming airborne again, only to come back down to earth with a thud. Those men on the back are hanging on for dear life, putting all their trust in their driver. They manage to pass the giraffe, come to an instant stop. Like a well oiled machine all men erupt off the vehicle chasing after the animal. The 2 sprinters are up front with their rope. One hangs back as the other risking his life, sprints past the front of the giraffe. The rope is now high on the animals chest as the men take up their positions. It’s like a tug-of-war, except the rope isn’t straight, the giraffe now having formed the apex. The men are being dragged along like puppy dogs, but they hold on. They can’t dig in their heels, they have to move around behind the giraffe. The 2 ends of the rope cross. The giraffe becomes tangled and trips over its own legs. All part of the plan. And then she falls, her head falling from way up there hits the grounds with a thud. The rope is immediately forgotten about as all the men dive onto her head and neck. If they can keep her head down she won’t be able to get up. For a brief moment her legs flail in the dust filled air. A blindfold is wrapped around her head and she settles down. Other members of the team arrive. 2 holes are drilled in her ossicone (horn), she struggles briefly but the men on her neck sit tight. The satellite transmitter is attached with 2 bolts. While this is happening a vet is monitoring the giraffe’s pulse and breathing. Others are taking measurements and a DNA sample is taken. All is done. The giraffe has been down less than 8minutes. Everybody moves back leaving a couple of men on the giraffes’ head. The blindfold is removed giving the giraffe a little time to adjust to its surroundings. The 2 men jump back. The giraffe now realising it is free, reels its neck around, gains momentum and in one fluid movement is back on its feet running off wild and free. Another precision operation and another giraffe that will provide invaluable information on the plight of these animals. In this area giraffe populations are doing well, but in other parts of Africa some giraffe species numbers are declining dramatically. Hopefully the information gained from these satellite transmitters will help in gaining a better understanding of giraffe biology and what is necessary to make sure we save all those we can.
Obviously for KiKi it was her first giraffe capture and her favourite toy is Gerry. She was clearly loving the experience feeling a real giraffe mommy. One very happy, and lucky little KiK’s.