5th June 2019
I know just a presence and me driving around the area that I plan to work, all help getting the animals to accept Joanie and me. So a lot of my nights are spent doing just that and at the same time looking for potential action or just potential animals that I can follow to help them realise I mean no harm.
Driving through the riverineI I wasn’t expecting to see their tawny shapes. A lion and 2 lionesses were dwarfed by the huge trees. He was hanging back as the girls moved to my right with purpose. I couldn’t see what had caught their interest. But their gaze didn’t last and the 2 girls rested up under a grove of Nyala-berry trees. I didn’t join them as there was a veil of webs hanging from the trees like puppets on a string, caterpillars descending on their webs to the ground as they headed off to pupate. These caterpillars are pretty harmless but piles of them would know doubt get squashed in my moving around the car and I wasn’t too looking forward to a green lotion on my skin or sleeping bag. The male lion had plonked himself down just where he was when the girls did. About 50m east of them a small pair of eyes was watching the goings on, a genet perched in the fork of a Leadwood tree. Some impala roared to the south. The girls were up heading slowly south. There was baboon chatter in the direction of the impala. They hadn’t seen the lions, but the lions were sure to have their cover blown if they continued and wisely turned back and headed north. 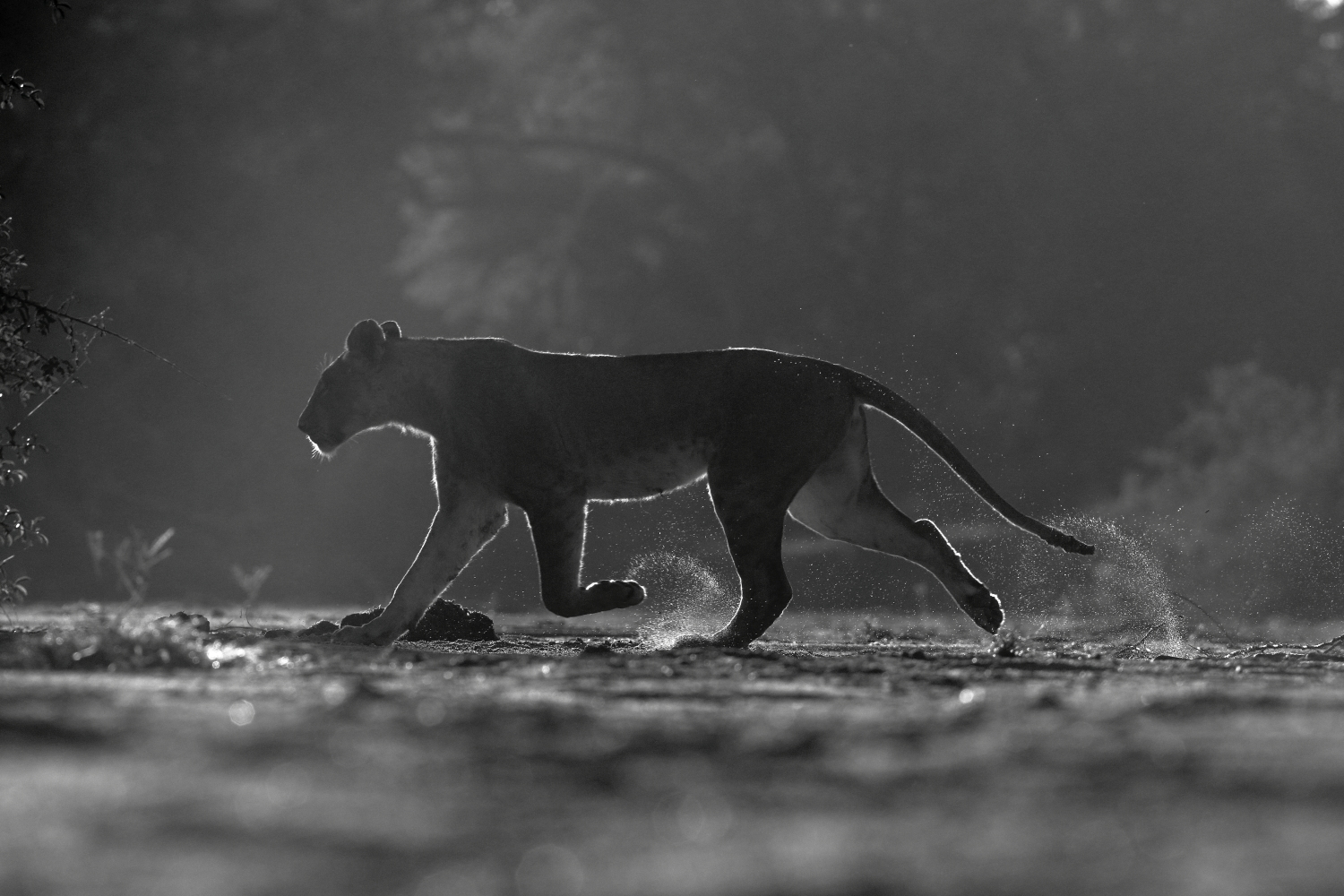 They were moving thorough the huge open woodland of Nyala-berry’s, Leadwoods, Raintrees, Umbrella thorns and Sausage trees. All majestic trees in their own right. There was no cover on the ground and very little leaf litter. The lions could move freely and quietly all spread out. A few Croton bushes and some small Acacias provided them with little cover. A pair of eyes ahead coming towards us. The lions hadn’t seen it. A female leopard was walking straight towards me. Lions and leopard hadn’t seen each other. About 30m apart the leopard saw the lions. You could almost see her eyes widening in shock at what was beaming down on her. She drew her body close to the ground, almost flat and slunk off to the side. She didn’t run away. She wanted to see these brutes pass her by, which they did completely unaware of her presence. Once they’d past she moved on south.  Plenty of eyes ahead. A herd of impala. We were still in big tree country, fairly open but with scattered bushes. Enough cover for the lions. They were on it. Keeping themselves spread out, they approached. There wasn’t much effort to conceal themselves and try as they did to lower their body’s to the ground, they were no match at mastering the act like the leopard did. There was no tactic in the lions’ hunt. About 30m from their prey they all attacked running blindly into the herd. Their ‘tactic’, if you could call it that, was to cause chaos and have impala running everywhere. If one ran over you, you grabbed it. I lost the lions in the advance. If they had caught an impala there was bound to be lots of growling and fighting over the small carcass. I waited listening. The impala were quiet. Somewhere down there a pair of Giant-eagle Owls were hoot-grunting to each other. It sounded like an interesting conversation. Twenty minutes later and there still wasn’t a peep from the lions. I drove around, but couldn’t find them.