It was very windy. I suppose that typical wind we get in August. There was a blanket of cloud rolling in very slowly from the east. It looked like a smooth blanket, its front edge soft and round just catching the last rays of the sun turning the edge pastel pink. A strange beautiful sight of threatening weather. I was arriving back at the leopard kill. There were baboons in the area heading back to their roost. Then all craziness broke out. Baboons screaming and shouting from the Nyala-berry tree. When I’d focused in, the mother leopard was lying on the carcass surrounded by baboons. They weren’t scared and would happily kill her cub. Where was it? She was standing her ground probably protecting her little one someone there. She was facing the donga, her back to me and to several baboons sitting in the Thilacium bushes  at the base of the Nyala-berry. A big male baboon climbed a broken branch that lay on the ground, its broken end on the termite mound where the mother was. He was jumping on the branch trying to intimidate her. It worked but not the way he wanted. In a flash she spun round and launched herself at the branch. There was that wild commotion again, baboons screaming everywhere. A very intimidating situation for any mother. The baboon on the branch was quick and somehow (their tails are always upright) managed to disappear his tail between his legs. Other baboons rushed the anthill. The mother stood fast. She could protect herself up there with the donga providing a safe backdrop that the baboons couldn’t approach from. She had chosen her battle ground well. The sun had set a while ago, the wind had died down and the baboons were still standing their ground not going to roost yet. Some impala had joined the baboons in the donga, feeding all around them. An interesting sight considering there was a leopard only 15m from them. Commotion broke out again as the mother launched herself at another baboon climbing the branch. There was still no sign of the cub. Did the baboons grab it in that first advance when I was arriving there? It was now nearly dark and one by one the baboons peeled off heading west to their roost. (I can hear them now in their roost probably only a 100m away. Dawn will soon be on the way. Will they be back to torment the leopard?) There was one big male baboon, still sitting at the bae of anthill watching the leopard. Only when it was dark did he move off. It was now quiet. That same quiet I’ve often spoken of. Not a sound. Not even crickets down here. The wind had died down completely. The moon shone a lovely light on the scene. (Last night when I got here the moon had long gone to bed.) The Thilaicum bushes stood dark in ‘bright’ light coloured sand. The anthill was in complete darkness. The Southern Cross was perched above the Nyala-berry. That blanket of cloud had turned white, lit by the moon and was still advancing. The only sound now was the mother crunching on the carcass. 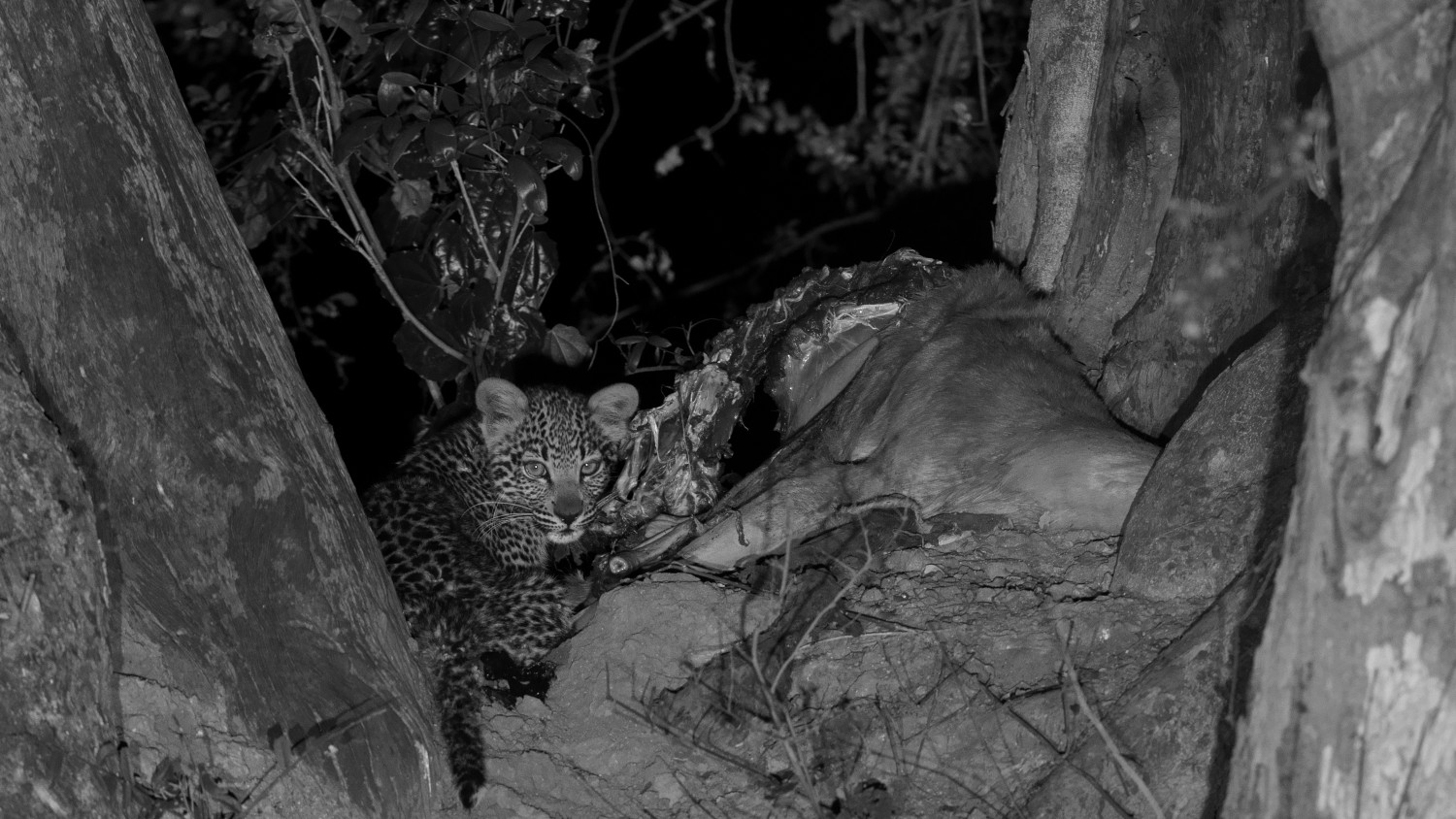 With my light on I noticed movement in the leaves above her. Her cub. It had obviously taken refuge high up in the Nyala-berry and with everything being safe, was coming down to feed. They fed and disappeared into the donga. In the middle of the night they were back feeding again. The moon had dipped below the western horizon. It was really dark. The cloud had arrived and it was warm.
Male baboons are now (as I type) greeting the coming dawn with their booming barks. It will be light soon. Will they be back to torment the leopards or have the leopards moved off and will only return after dawn when the baboons have gone?